Perched on a trachyte cliff that towers over the Fiora River on the slopes of Monte Calvo rises the village of Santa Fiora, with a history unlike any of the other towns in the Amiata region.

The town surprisingly wasn’t subject to the control of the Abbey of the Holy Savior but quickly became the Aldobrandeschi family’s most important possession on the mountain, successfully resisting the numerous conquest attempts by the Sienese over the years. In 1439, control of the town was passed to the Sforza family, only to end up under Florentine rule in 1633.

Now Santa Fiora, after its mines were closed, is an important tourist destination in the Monte Amiata area, steeped in traditions that even now continue to take place, bearing witness to the great history that the capital of this side of the mountain holds. The medieval village is on the official list of the most beautiful villages in Italy curated by ANCI, and has also received the award of the Orange Flag from the Touring Club.

Located on the southern slope of Monte Amiata and surrounded by chestnut trees, Santa Fiora’s extensive historic centre is spread over a trachyte hill and is split into three neighbourhoods: Castello, Borgo and Montecatino.

Once in the Castello district, the impressive Sforza Cesarini’s Palazzo del Conte, now the offices of the town hall, will grab your attention. Inside the Palazzo is the intriguing Monte Amiata Museum of Mining, dedicated to the history and techniques of mercury extraction that heavily defined the area between the 19th and 20th centuries.

Once you’ve had a look around the Palazzo or passed by through an archway, you’ll find yourself in the square that’s the beating heart of the town. From here you can continue discovering Santa Fiora along Via Carolina, which leads to the Suffragio Church of 1716, then head to the Parish Church of Santa Flora and Lucilla, the most important of the town’s monuments.

The Parish Church, built before the year 1000, was rebuilt in the 13th century and enlarged in 1792 when the side aisles were added. The inside of the church is home to a collection of incredible terracottas attributed to Andrea della Robbia.

Moving on from Castello, the Borgo district is the part of Santa Fiora that’s surrounded by walls. The Church of Sant’Agostino is in this district, founded in 1309 and also comprising a convent, of which only an archway from 1473 remains. The Cappuccine Convent is also in the historic centre, founded in 1601 and closed in 1991, linked to the Miraculous Crucifix cult and the Procession of Trunks.

Head to the Montecatino district through the Porta del Borgo, and from here take a visit to the Peschiera, a stunning lake that collects the Fiora’s waters. Nearby is the small Church of the Madonna della Neve, better known as “della Pescina”, perhaps more modest in appearances but rich in discreetly preserved frescoes credited to Francesco Nasini. This church’s peculiarity comes from its floor, which consists of a glass covering through which you can watch the spring of the Fiora flowing just below walking level. Near the Peschiera is the Gallery of the Fiora River Springs which anyone who has ever visited Santa Fiora, without exception, will tell you are fascinatingly striking.

Near the hamlet of Selva, take the time to visit the Convent of the Holy Trintiy, surrounded by the Santissima Trinità Forest Reserve. Inside the convent is a beautiful Della Robbia crucifix and a series of valuable paintings. And, further into the sacristy, the ancient and legendary head of the dragon is displayed.

Legend has it that towards the end of the 15th century, Count Guido Sforza held power in the County of Santa Fiora. At that time, there was a rumor that the countryside’s dense woods were infested by a terrifying dragon, a demonic monster, perhaps even Lucifer himself. The Count, challenging the terrible dragon, would face him alone in the forest to kill it and take its head back to the village as a sign of victory.

He sent half of the terrfiying creature’s skull to Santa Trinità dei Monti in Rome and had the other half enclosed in a reliquary in the Convent of the friars of SS. Trinità di Selva, where it is still on display. The skull in question was, however, the subject of continuous studies for many centuries; the answer to the endless questions only arrived in the second half of the twentieth century by John Thorbjarnarson, an expert on crocodiles.

No one has yet explained the reason for the discovery of a crocodile in Santa Fiora’s woods, but perhaps this is a mystery best left to the imagination.

There are numerous possible trips in Santa Fiora’s surroundings and nearby hamlets: for example, the nature trail along Monte Amiata is perfect to cross by foot or bicycle.

Don’t miss the hamlet of Bagnolo, known as the town of seven springs, whose waters were once used to wash clothes and quench the thirst of pack animals and, when there was no running water in people’s homes, to provide water to the whole population.

The Feast of Saints Flora and Lucilla is the patron saint feast of Santa Fiora and takes place every 29 July with a procession that carries the relics of the two saints through the town’s streets. In recent times, the Saints’ Palio has also taken place on this day, with a historical procession and an archery tournament in which the representatives of Santa Fiora, Bagnolo, Bagnore and Marroneto compete against each other.

The Montecucco Wine and Amiata Taste Trail crosses Santa Fiora. The route allows you to discover all the typical products of this unique area such as the wine, Montecucco DOC, the refined Seggiano Extra Virgin Olive Oil and the Monte Amiata IGP chestnuts. 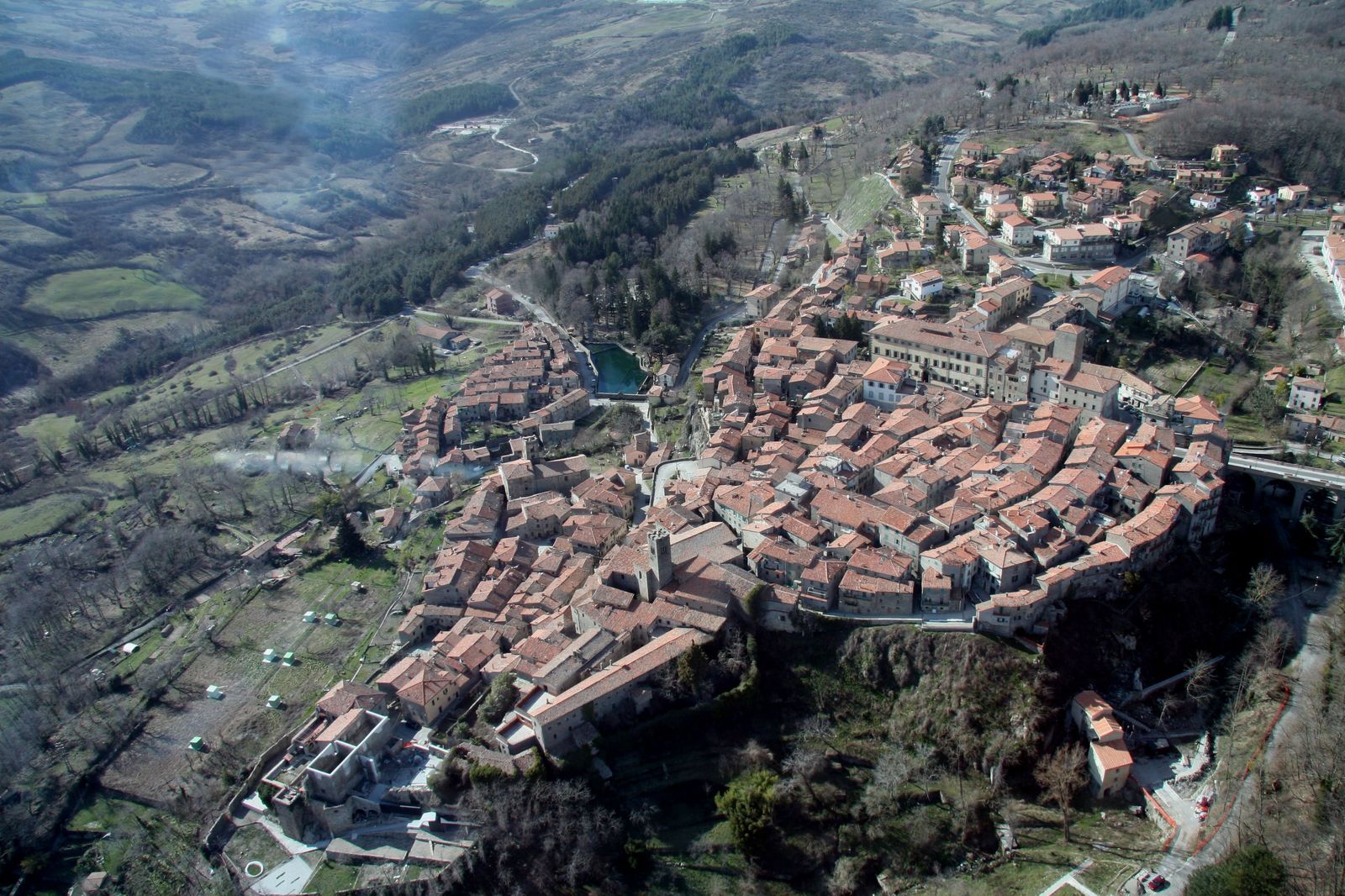 Read the story of Santa Fiora on