Monsummano is known for its precious thermal springs, where hot water surges from the ground, relaxing and benefiting the health of those who bathe in it. What distinguishes this place from other leisure spots is the Giusti grotto: a subterranean gallery nestled in a centuries-old park, so marvellous that Giuseppe Verdi referred to it as the eighth wonder of the world.

Monsummano owes more than a few of its characteristics to the Medici family, who loved coming here. Montevettolini, for example, is a little hilltop village that started life as a medieval stronghold: these were the Medici's favourite hunting grounds, and the country residences that we see here today date back to that very period. Climbing to the acropolis, you are rewarded with a panorama that frames the entire valley.

Another Medici project, mainly driven by Grand Duke Ferdinand I, was the sanctuary dedicated to the Madonna della Fontenuova, which is steeped in miraculous stories. According to legend, a young shepherdess was helped by the Virgin Mary to find a flock that she had just lost: this proved to be the first of many visions that appeared to the local faithful, only kindling their fervour. The origins of the sanctuary are narrated in fourteen lunettes from the seventeenth century, which are frescoed in the loggia.

In order to take care of the religious pilgrims that the place attracted, the Medici constructed the Osteria dei Pellegrini (pilgrims' guesthouse) in the historic centre's main square. Today the building functions as the museum of the town and its territory, with exhibits that tell visitors something about the Valdinievole and about how the marshy Padule di Fucecchio was reclaimed. The museum complex also extends to the Villa Martini, which is home to the Museum of Contemporary and Twentieth-Century Art.

Montecatini Terme is another standout in the beautiful Valdinievole, thanks to its popular spa resorts and elegant Liberty architecture. After a relaxing massage and other innovative treatments, you can climb to Montecatini Alto (upper Montecatini) on the historic red cable car.

Collodi too is definitely worth a visit, thanks to Villa Garzoni and its Italian garden. It would be a shame to miss out on the famous Pinocchio Park - after all, the iconic wooden puppet was born from the pen of Carlo Lorenzini (better known as Carlo Collodi), who lived here. If you love parks full of colourful flowers, you shouldn't omit the little town of Pescia, the homeland of nursery gardening.

The most popular events at Monsummano Terme most certainly include the Notte Bianca, a summer date that brings the historic centre to life with shows, video installations, tasting sessions, concerts and markets. The cultural calendar of the little Teatro Yves Montand, in piazza del Popolo, is also a rich one. Finally, the nearby hamlet of Cintolese has the traditional Grape Festival in autumn.

Monsummano Terme is located in what is known as Tuscany's "Chocolate Valley": all the Valdinievole, in fact, is home to master chocolatiers who create some truly unique recipes of stunning quality and the richest aromas.

Apart from olive oil, charcuterie and local cheeses, you can taste sweets and cakes typical of the surrounding area. These include brigidini from Lamporecchio; while cialde are a speciality of Montecatini Terme, and go especially well with coffee, dessert wine and ice cream. 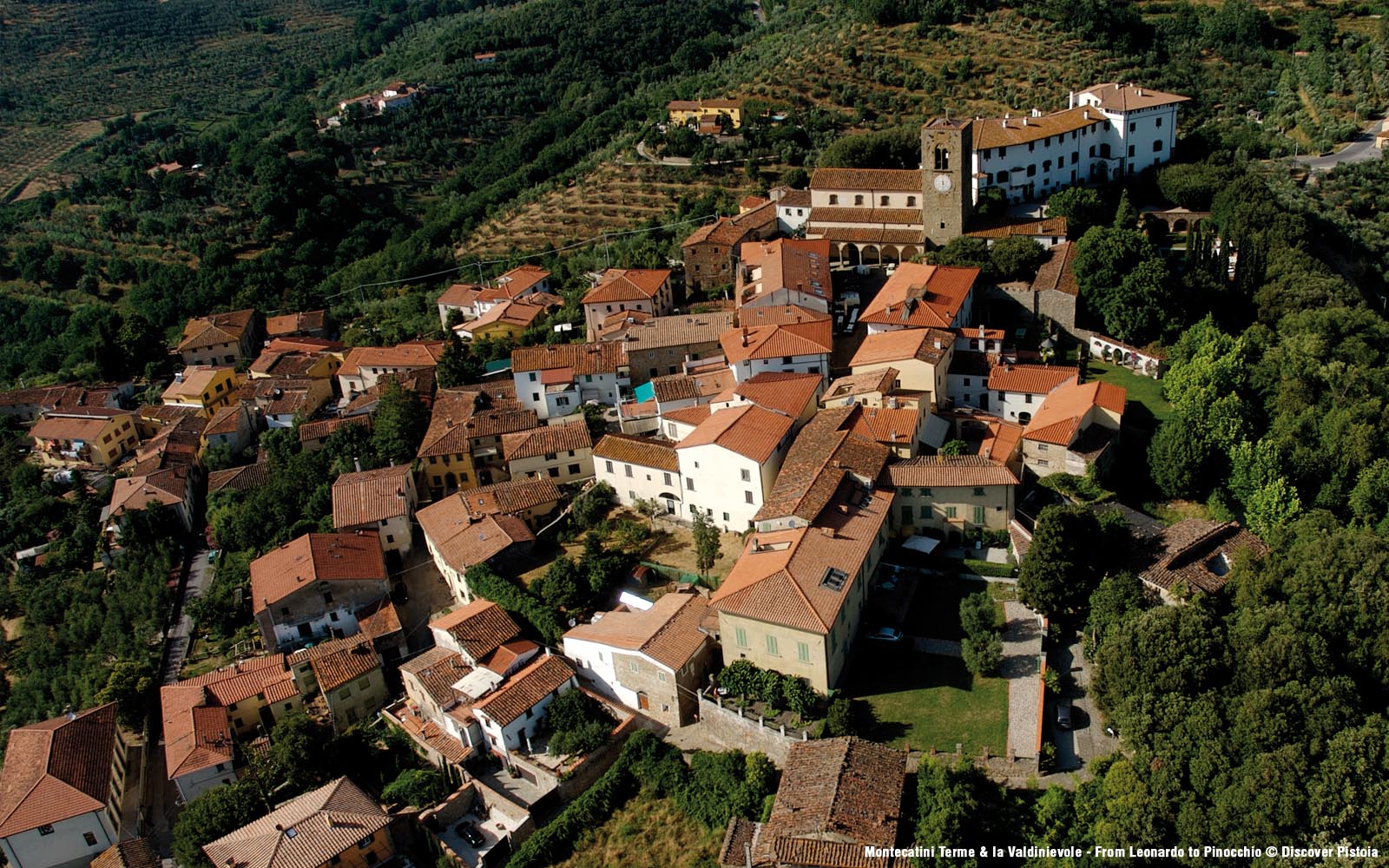 Read the story of Monsummano Terme on