Livorno
The Mediterannean’s very own little Venice, with its historic port.

Founded as a city in 1606 by the Medici family, Livorno became a welcoming oasis for all those who had been religiously, politically or racially persecuted, enriching itself with the resourcefulness and customs of the most diverse foreign nations.

Bridges, canals, and historic palaces are reflected in the calm waters, making it feel like a little Venice on the Mediterranean.

Because of the Medici’s military and commercial strategies, it’s no coincidence that Livorno is not only a sea town, but also the region’s main port. As of the second half of the sixteenth century, it was agreed that the fishing village built around the Mastio di Matilde di Canossa should become one of the main ports of Europe.

The evidence of the "Nations" that, from that moment on, contributed to the founding and development of a port known throughout the Mediterranean is still present today in the city’s places of worship, cemeteries, archives and cuisine.

Everything the city cherishes, from its history, culture, and stunning sunsets to its clear and fresh air, water sports, and culinary traditions, is connected to the sea. In the nineteenth century, it was here that the very first bathing establishments in Europe were built, slowly cultivating the concept of a seaside holiday.

What to see in Livorno

It’s no surprise that the classic snapshot of Livorno is an infinite view of the sea from the famous  Mascagni Terrace, with its unique black and white checkered floor.

The four Moors monument near the port is another of the city’s symbols. The Old Fortress – home to the magnificent Mastio di Matilde and built to guard the port – is joined by waterways to the New Fortress (in the heart of the city centre).

The Cathedral of San Francesco, Duomo di Livorno, is also in the city centre. Its façade had to be completely rebuilt after the Second World War bombings. While wandering through the historical alleyways you’ll come across some of the most beautiful squares in Italy, such as Piazza delle Repubblica, also known as the Voltone, and Piazza Grande.

To truly discover the city that was home to Pietro Mascagni, Giovanni Fattori, Amedeo Modigliani and Giorgio Caproni, simply follow the places, sounds and colours.

One of the most fascinating routes will lead you to Little Venice, where you follow the canals by boat that leads to the Renaissance places in the centre of the city.
The splendid Villa Mimbelli houses the "Giovanni Fattori" Civic Museum, which displays works by 19th and early 20th century Tuscan painters; the Mascagnano Museum, dedicated to music, also houses the historic Goldoni Theatre.

The historical and religious traces of the 'Nations' that populated Livorno are unforgettable; start with the Jewish Museum "Yeshivà Marini", then head to the Museum of Santa Giulia in the Church of the Armenians.
For those who want to discover what secret treasures are hidden in the sea, a visit to the Museum of Natural History of the Mediterranean Sea in Villa Henderson is an absolute must, which combines historic relics with a modern didactic edge, while live samples of Mediterranean fauna can be seen in the Livorno Aquarium.

You’ve only really seen the city once you’ve walked through the Art Nouveau or eclectic villas in the Ardenza district right on the seafront.

A visit to Livorno’s impressive temple of food, the vast Mercato delle Vettovaglie, is unmissable considering its status as one of the largest historical markets in Europe.

Before heading to the sea, if you wander uphill you’ll come across Montenero, an area built on a headland that overlooks the city and is home to the cherished Sanctuary of the Madonna delle Grazie, a place of remembrance and deep faith for the people of Livorno and beyond.

If you visit Livorno in the summer, it’s an absolute must to take a reviving dip in the rocky caves of Romito, Quercianella bay and the crystal blue sea of the Calafuria nature reserve.

Gorgona and Capraia islands exhale the same salty air, and from their natural and untouched shores observe the city from afar.

Just a few kilometres from the centre, the Livorno Mountain Park offers you the chance to be fully immersed in nature, extending for 1,300 hectares through the Livorno, Collesalvetti and Rosignano Marittimo. The “green lung” of the area, it’s ideal for trekking, mountain biking and horse riding.

Every year in mid-June, Cacciucco Pride takes place: three days celebrating the famous dish originating from the poorer parts of Livorno. Every year clubs and restaurants all over the city take part in the festival, offering varied versions of Cacciucco, ranging from those that stick to the original to more adventurous versions, but always whilst respecting quality and using local products.

At the end of July, the most popular festival of the summer takes place annually in Livorno: Effetto Venezia. This brilliant festival lasts for five evenings and brings the historic heart of the city, the La Venezia district – distinctive for its bridges and navigable canals - to life. The event brings out the city’s artistic fervour, and its desire to bring people together and enjoy the architectural splendour of a unique district.

In Livorno, rowing competitions are held every year between the city districts with a series of challenges that have far-stretching historical roots. Among these is the Palio Marinaro which takes place around the first Sunday of July in front of the beautiful Terrazza Mascagni.

From July to September, music pervades throughout the city with concerts and performances on the occasion of Mascagni festival, the event that pays homage to the famous composer Pietro Mascagni who spent part of his life in these places and who is remembered mainly for his Cavalleria Rusticana in 1890.

The highlight of Livornese cuisine is Cacciucco, that, in spite of appearances, is more than just a fish soup: it expertly mixes different fish together, just as it brings people together in community spirit while eating it.

In Livorno, the typical cuisines of the Mediterranean come together, including Nordic fish, such as cod and stockfish. Unmissable local street food includes the 5 e 5, a salty chickpea cake nestled between two slices of French bread.

Finally, a visit to Livorno is not complete without tasting Ponce alla Livornese, the legendary drink made with coffee, rum and sassolino.

Livorno and the cinema

Livorno, city of flavours: a food tour from cacciucco to ponce

A tour of faith in Livorno

From 1 to 3 days Villas and buildings in Livorno: two days to discover the Tuscan Liberty

One week Exploring the eclectic culture of the Etruscan Coast 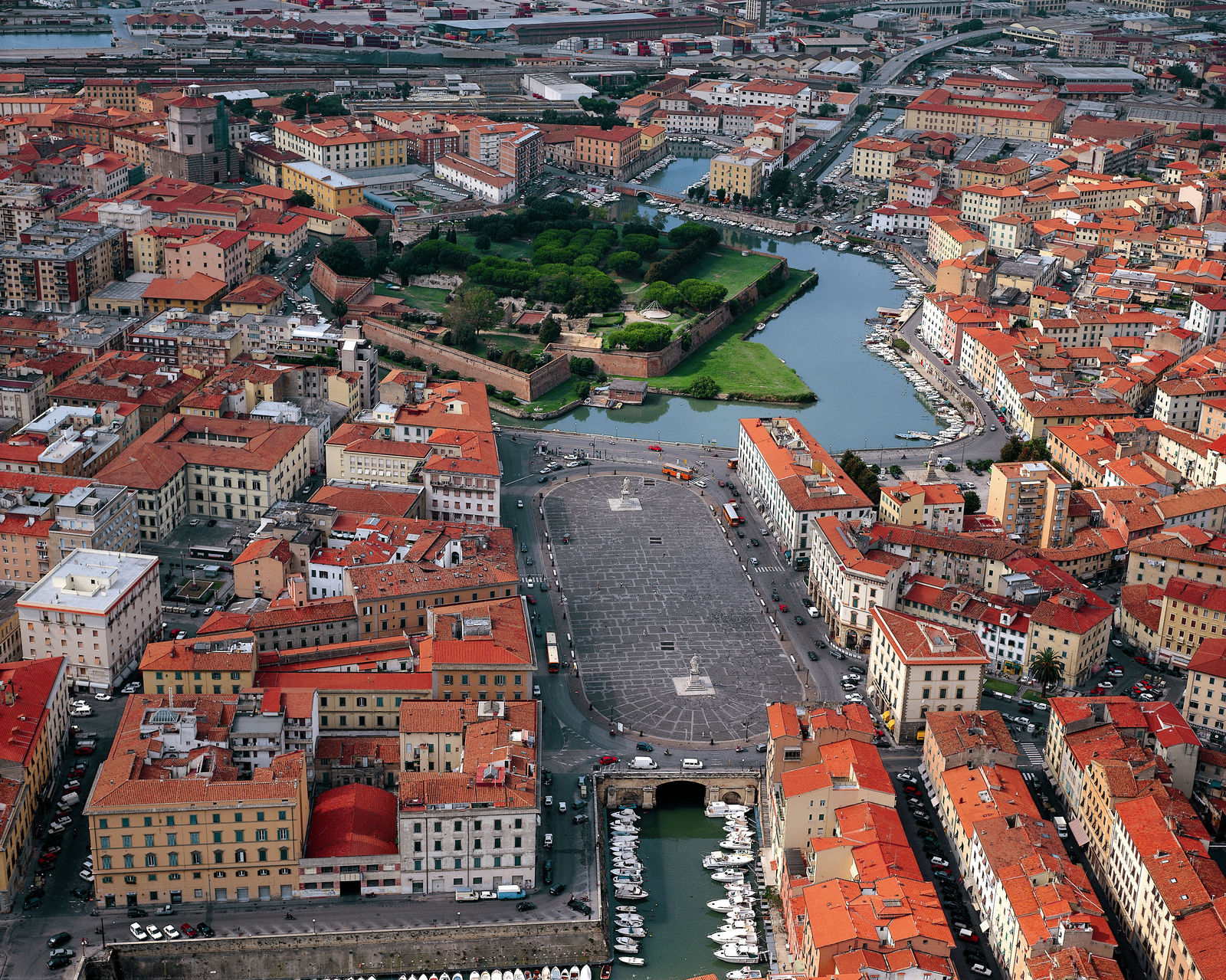 Read the story of Livorno on