Greve in Chianti is the only town in the province of Florence that is entirely part of the Chianti area. In Ancient Greek times, Greve was only a small center in the area, then called Agro di Florentia. The Romans were the first to live here permanently, due to its proximity to the via Cassia. Indeed, the Romans left their mark on the local place names, such as Siliano, a town whose name comes from a colony of Sulla veterans who settled there.

Greve in Chianti’s origins – in terms of any semblance to its appearance today -  lie in the Early Middle Ages.

In the 11th century Bernardo degli Uberti gave the historic settlement on the San Francesco hill – which takes its name from the small Francescan community that settled there after having founded a hospital - to the monastery of San Salvi. Over the years, Greve expanded thanks to its well-connected position that allowed for easy communication with Florence and the Valdarno river markets, as well as with well-known routes such as the Via Francigena and the Via Volterrana. This is how the Greve ‘mercatale’ (market), a hugely popular commercial area, was founded; it’s particularly distinctive for its parish churches, churches, castles, aristocratic villas and farms, in the age of Florentine control. Towards the end of the 14th century, the area began to produce a wine particularly popular amongs noble Sienese and Florentine families. The latter enriched Greve through investments and, in some cases, direct interventions with the local farming economy.

After the Unification of Italy, the Greve ‘mercatale’  became a town and established its reputation as one of the most important centres in Chianti.

Piazza Matteotti, with its unique triangular shape, is the beating heart of Greve in Chianti. The piazza is surrounded by picturesque arched loggias, brought to life with shops, trades and taverns where you can try and buy typical local products.

In the centre is a large statue of Giovanni Verrazzano, the famous explorer who was born in Greve. The church of Santa Croce overlooks the piazza, home to valuable works including a triptych by Bicci di Lorenzo depicting the Madonna with Child and Saints.

Another stand-out is the Wine Museum, taking you on a journey through the history, culture and tradition of the famous Chianti wine that’s been produced here for centuries. We also recommend visiting the convent of San Francesco which houses the Museum of Sacred Art in Greve in Chianti, with a surprising collection of paintings, sculptures and décor dating between the 14th and 19th centuries.

In Greve’s general area are many small and delightful villages; it’s definitely worth visiting the picturesque medieval castle of Montefioralle, a medieval military centre that still retains its historic traces. It’s said that the village is the birthplace of the Amerigo Vespucci family (the famous Florentine sailor). The Parish church of San Cresci and the Church of the Sacred Heart in Greti are also beautiful.

Travelling around the Chianti hills, you will be enchanted by the villages nestled among vineyards and olive groves. Gaiole in Chianti, for example, is a perfect destination for anyone who’s looking to surround themselves with culture and wine tasting, what with its wineries and historic castles. Uncork a bottle of local wine here and take a visit to some of the Ricasoli family’s historic fortifications, such as Cacchiano Castle and Brolio Castle.

Those particularly interested in the mysterious Etruscan civilisation should instead head to Castellina in Chianti, where many relics date as far back as the 8th century B.C. The Montecalvario Tomb and the Acropolis (in the direction of San Donato in Poggio) are some of the most important attractions around today.

The Sant’Agnese Forest Nature Reserve in Chianti, a cypress wood full of holm oaks and strawberry trees, is also well worth a visit.

In September, Greve in Chianti hosts the Expo Chianti Classico. The event is dedicated to Chianti Classico wine, recognisable for its Black Rooster stamp and its region of production. During the celebrations, citizens organise cultural and folklore activities, drawing anyone with a taste for wine to the vineyards and cellars.

In spring, the village of Montefioralle should claim first place on any foodie’s list thanks to its ‘San Giuseppe’ Fried Rice festival, which usually takes place on the 19th March to coincide with Father’s Day.

In Greve, just along the Chianti Classico Wine and Oil Trail, are some of the best wines in all of Tuscany. The Chianti Classico DOCG – the Italian red which is applauded and loved all over the world – is produced here, and goes perfectly with local meats and cheeses. Mezzone, for example, is a type of salami produced with pork, beef, spices, salt and pepper. Chianti Classico DOP extra virgin olive oil is also excellent, pairing wonderfully with soup, grilled meats and vegetables, as well as with typical Tuscan dishes such as ribollita and panzanella. 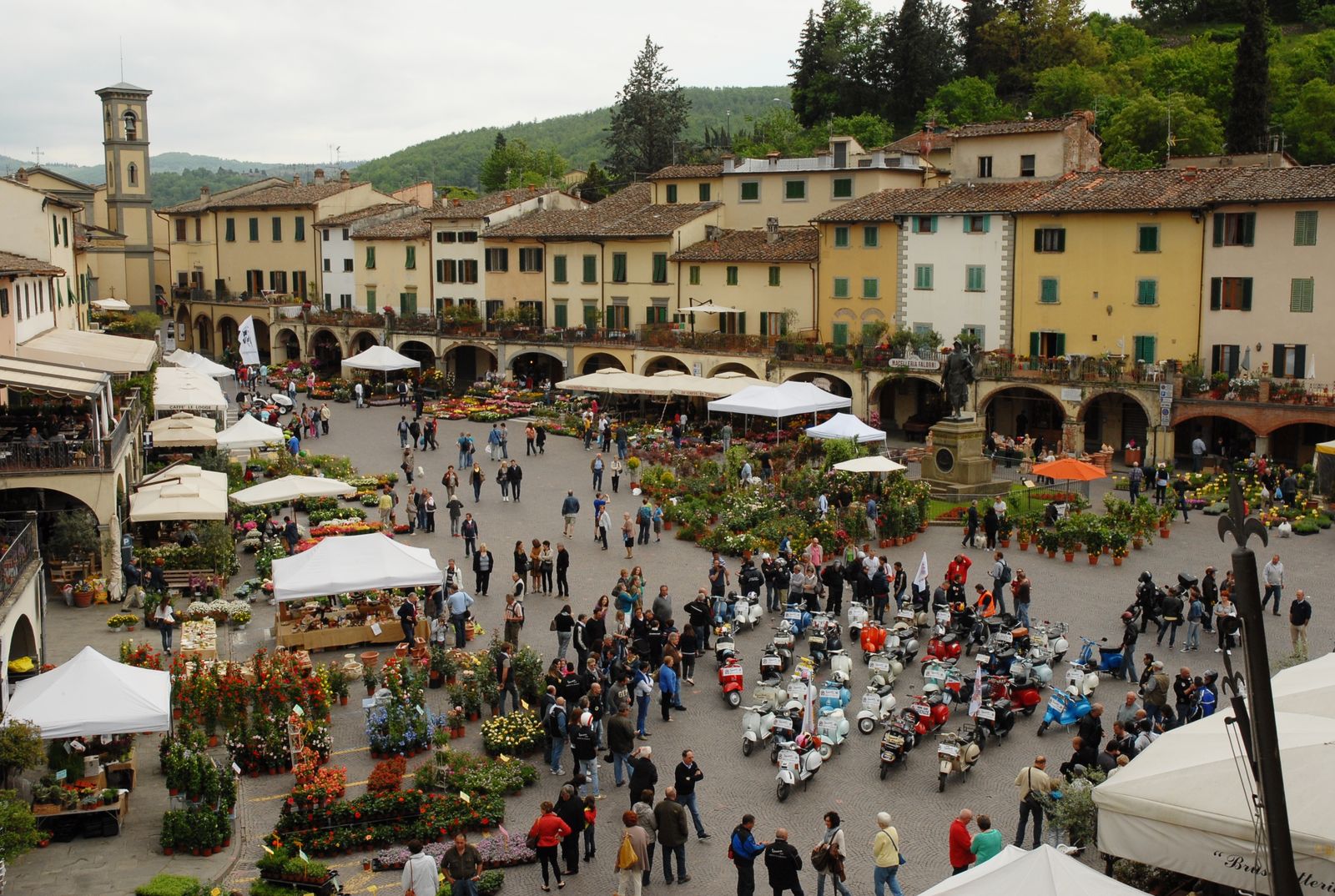 Read the story of Greve in Chianti on