Florence
A stunning city where you will lose yourself in the art, history, fashion and traditions of Tuscany

No one plans a visit to Tuscany without planning a visit to Florence: the city of the lily is a treasure trove of artistic treasures and the centre of a fervent vitality. Aside from its exceptional heritage of art, bearing witness to its centuries of civilisation, Florence can be enjoyed in so many ways: promenading along the enchanting riverbanks at sunset, entering the bohemian alleys of the Oltrarno, or getting lost in the narrow streets of San Niccolò, where walking by the old city walls will leave you feeling as though you have been magically transported into another era.

Discovering Florence means following in the footsteps of Dante Alighieri and ending up in front of his house. But in this city, in the space of only a few centuries, there also lived Cimabue and Giotto, fathers of Italian painting; Arnolfo and Andrea Pisano, who rewrote the rules of architecture and sculpture; and Brunelleschi, Donatello and Masaccio, who really kicked off the Renaissance. That's before we mention Ghiberti and the Della Robbia family, Filippo Lippi and Beato Angelico, Botticelli and Paolo Uccello, and universally renowned geniuses like Leonardo and Michelangelo.

The heart of Florence

It is impossible not to be charmed by the historic centre of Florence. The majestic Cathedral of Santa Maria del Fiore, commonly known as the Duomo, will take your breath away. Some of the most famous artists and architects of all time worked on this masterpiece, such as Arnolfo di Cambio, Brunelleschi, Donatello and Lorenzo Ghiberti.

The Baptistery of San Giovanni, dedicated to the city's patron saint, occupies the very same piazza as the Duomo. Its bronze doors, which depict the history of humanity and the Redemption, are a true spectacle of beauty.

If the 400-odd steps don’t dissuade you, we highly recommend climbing Giotto's Bell Tower - the bell tower of Santa Maria del Fiore - for a birds-eye view of the square.

The Palazzo Vecchio, or Palazzo della Signoria (which now functions as the city hall) is undoubtedly one of the most symbolic landmarks of the city. Its frescoed rooms, the Arnolfo tower, its courtyards and the coats of arms all take you back in time and recount fascinating stories of politicians, intrigues, myths and painters.

Continuing towards the Arno river, we find ourselves crossing the Ponte Vecchio, one of the oldest bridges in Florence, in all its glory. The bridge is utterly unique in that it is surrounded on each side with the workshops of goldsmiths and jewellers.

The verandas, squares, churches and even the streets of Florence are dotted with the works of the great historical artists, but the best way to discover them is to visit the unique museums, the likes of which you’ll find nowhere else in the world, located in the city centre.

For example, the extraordinary collection of the Uffizi Galleries gives you the chance to be within touching distance of some of the most beloved masterpieces of all time, such as the Birth of Venus and Primavera by Botticelli, the Tondo Doni by Michelangelo or the Head of Medusa by Caravaggio.

The Palatine Gallery in Palazzo Pitti, which collects paintings from the "golden ages", is also worth a visit for the sumptuous frames and furnishings, never mind the artworks. The Bargello is another must-see, home to sculptures by Donatello, Luca della Robbia, Verrocchio, Michelangelo, Cellini, for the most part coming from the Medici-Grand Ducal collection.

If the works of Fra Angelico in the San Marco Museum strike you as impressive, the Accademia Gallery will leave you breathless for its rich and varied collection of sculptures and plaster works, crowned by Michelangelo's David.

The same artist also left his mark in the Medici Chapels complex, adjoined to the Cathedral of San Lorenzo; meanwhile, a few steps from the monumental dome of the Cathedral, designed by Brunelleschi, is the Leonardo Da Vinci Museum; here you can see some peculiar mechanical reconstructions based on Da Vinci's sketches from his various manuscripts.

Being in the intimacy of the historical center means immersing yourself not just in the world of art but also the world of fashion. The historical centre of Florence (a World Heritage Site since 1982) is dotted with an extraordinary range of boutiques of all the most renowned brands; the city of the lily is an international reference point for high fashion.

If you’re looking for more authentic destinations, head to the Officine del Profumo di Santa Maria Novella (believed to be the oldest pharmacy in Europe) where you’ll find vases and ceramic stills from Montelupo Fiorentino, as well as from the Richard-Ginori and Chini manufacturers.

When you eventually tire of the bustling alleyways, leave the centre behind you and, after an invigorating ascent to either Piazzale Michelangelo or San Miniato al Monte, let your eyes feast upon one of the most evocative views in Italy.

There are many beautiful sights scattered around the region’s hills only a short distance from Florence. The ‘Ring of the Renaissance’, a trail across artistic landscapes which can be covered by foot or bicycle, passes through them.

You can pass through Vaglia to visit its Pratolino Medici Park, one of the most beautiful English-style estates in Tuscany. Villa Bellosguardo and the Enrico Caruso museum, in Lastra a Signa, are firm favourites.

Those looking for a place in nature to rest can opt for the Vallombrosa forest or the Reggello woods. With their centuries-old trees and isolated abbeys, they are the Florentines’ favourite destinations when looking for somewhere refreshing, especially in the summer season.

The Fireworks of San Giovanni are among the unmissable events that occur in Florence: every year on the 24 June, in conjunction with the feast of the patron saint of the city, the sky comes alive with a vibrant fireworks display visible from the Arno river. Flag-wavers, historical parades and competitions between the rowing clubs happen throughout the day in the city centre.  The local celebrations also coincide with the final of the Florentine Calcio Storico, a lively medieval version of football that takes place in Piazza Santa Croce.

Music is at the heart of the summer months: major festivals (such as Firenze Rocks and MusArt) bring renowned international artists to perform in the city. Easter, on the other hand, is synonymous with the Scoppio del Carro: a traditional ceremony that takes place in front of Santa Maria del Fiore and which involves the "flight" of a dove-shaped rocket that symbolizes the Holy Spirit.

Florence is, of course, the homeland of steak. But there are a thousand other specialties, including lampredotto, a “poor” cut of meat eaten in a street food style; not forgetting the typical salsa verde made from parsley, boiled egg, capers and anchovies. Cavolo nero (a kind of cabbage) has become one of the symbolic ingredients of Tuscany, and in particular Florence. Chefs use it to prepare typical traditional dishes, such as ribollita (a hearty bread soup) or farinata.

And what about desserts? Depending on the season, bakeries, confectioners and pastry shops showcase the schiacciata alla fiorentina (a bread similar to focaccia, with or without cream filling) and the schiacciata with grapes, pan di ramerino (a soft, sweet, medieval bread) and zuccotto, a parfait that - according to some – may have been invented by Bernardo Buontalenti.

Places of worship The basilica of Santa Trinita

LGBTQ+ art at the Bargello Museum

5 unmissable masterworks at the Uffizi Gallery

10 things to do in Florence with kids

10 Legs 4,4 km Dante's Florence: a walking tour among the places of the famous poet

Legs In the footsteps of Oscar Wilde in Florence

From 1 to 3 days Florence without barriers: 3-day itinerary

From 1 to 3 days One day tour of Florence

Nights of Archaeology July and August
in Firenze
star Festivals

From Hell to the Empyrean Sky. Dante’s World between Science and Poetry From 14 December 2021 - to 06 March 2022
in Firenze
Folklore 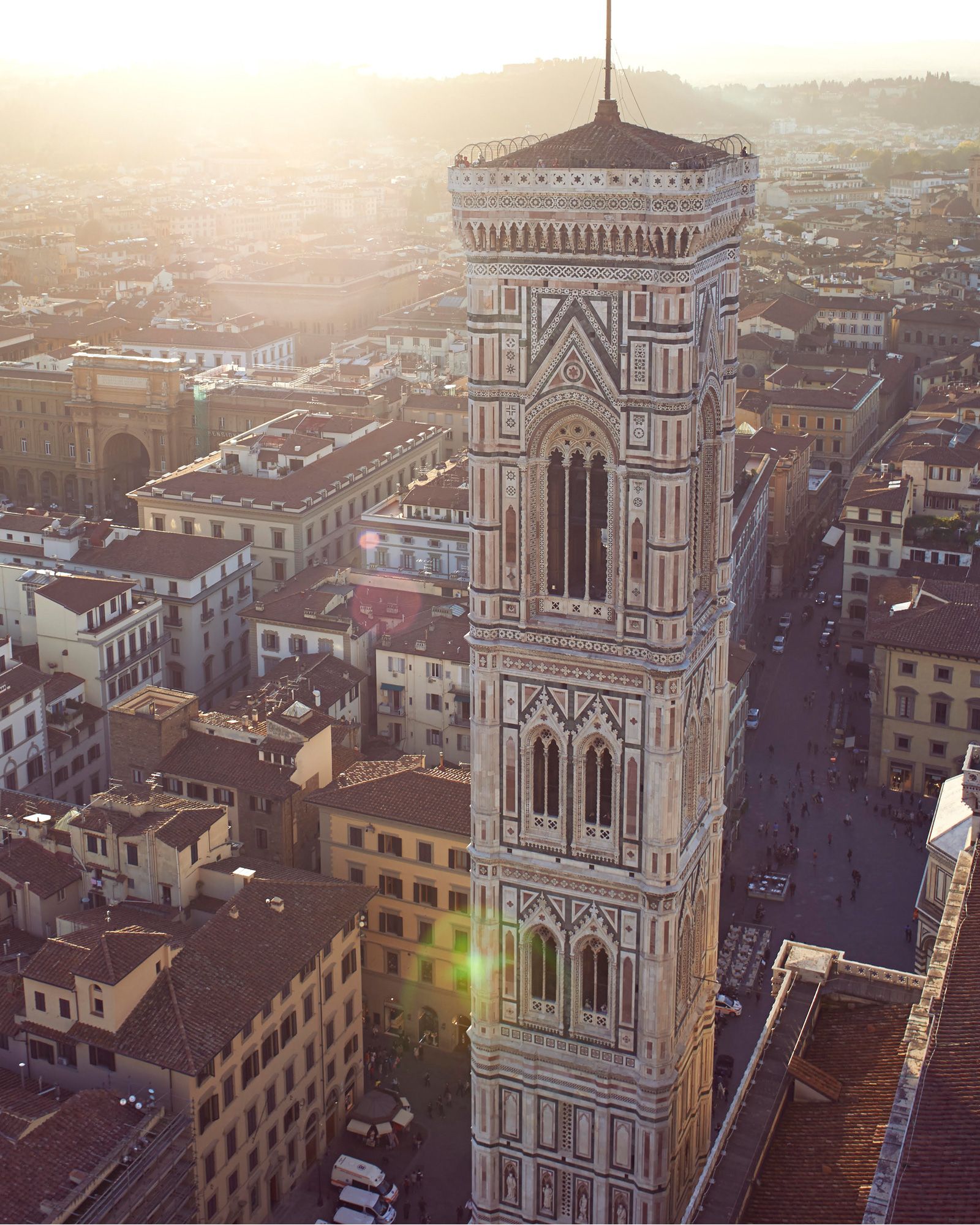 Read the story of Florence on