Cortona
One of the most beautiful villages in the whole of Italy, teeming with legends

Cortona is a small, welcoming town in the mountains between the Valdichiana and the Tiber valley. It was such an important Etruscan centre that the existence of ancient settlements is still visible today, with its two kilometres of walls dating back to the fifth century BC.

Cortona’s name derives from the Etruscan word Curtun, written in a bronze votive inscription from the third century BC, and is found right in the middle of the town.

What to see in Cortona

If you are in the historical centre, the beautiful Cathedral of Santa Maria Assunta, built in 1456, is a must-see. In 1480, the architect Francesco di Giorgio Martini began constructing the sanctuary of the Madonna delle Grazie in Calcinaio, just outside the city.

Cortona is full of museums and artworks; it is well worth a visit to the Museum of the Etruscan Academy, in which unique historical artifacts are kept. The Diocesan Museum is equally remarkable, and collects treasures such as The Annunciation by Beato Angelico and The Deposition by Luca Signorelli. Cortona’s archaeological area, the Fortress of Girifalco and the Abbey of Farneta are also unmissable landmarks.

The famous Franciscan convent Le Celle is only a short walk starting from Cortona's centre. You can also explore villas and gardens along the flower trails that lead to Arezzo.

Cortona’s archaeological park includes significant Etruscan and Roman monuments within the historical centre as well as the general area: the system of powerful Etruscan walls that surround the whole of Cortona and the numerous cisterns dating back to Roman times are found within the city. Impressive funerary buildings from the Etruscan period, known as Meloni and Tanelle, are located in the wider area. The tumulus (burial mound) II of Sodo is particularly mind-blowing, with its spectacular terraced stairs decorated with sculptures and architectural elements that recall the East.

Summer is the perfect time to visit Cortona, with events such as Cortona On The Move, a contemporary photography festival that puts on its exhibition from mid-July to the beginning of October.

Every August and September sees the return of Cortonantiquaria, one of the longest-running antique exhibitions in the whole of Italy.

Some of the must-try specialties include: black crostini with Tuscan liver, pici pasta in a meat ragù, pappardelle alla lepre (pappardelle with hare ragù), minestra di pane (bread soup) and the classic fagioli all’uccelletto (a soup-style dish composed of beans, tomatos and sage). We recommend you also try the castagnaccio (chestnut flour cake) and le fritelle di riso (rice fritters), both of which are typical local desserts.

Where was Under the Tuscan sun filmed?

An artistic trip in Tuscany: accessible museums and routes

One day in Cortona

Living a gold passion in Arezzo and environs

In the footsteps of Beato Angelico

3 Legs 6.2 km Discovering the Etruscans in Arezzo and Cortona

5 Legs 10.2 km Etruscans in the Valdichiana, an itinerary from Arezzo to Chianciano Terme

From 3 to 5 days Antiques, art and eclectic festivals in the Tuscan Valdichiana

From 3 to 5 days Via Romea di Stade: 5 days walking through history

One week One week in Val di Chiana and Maremma 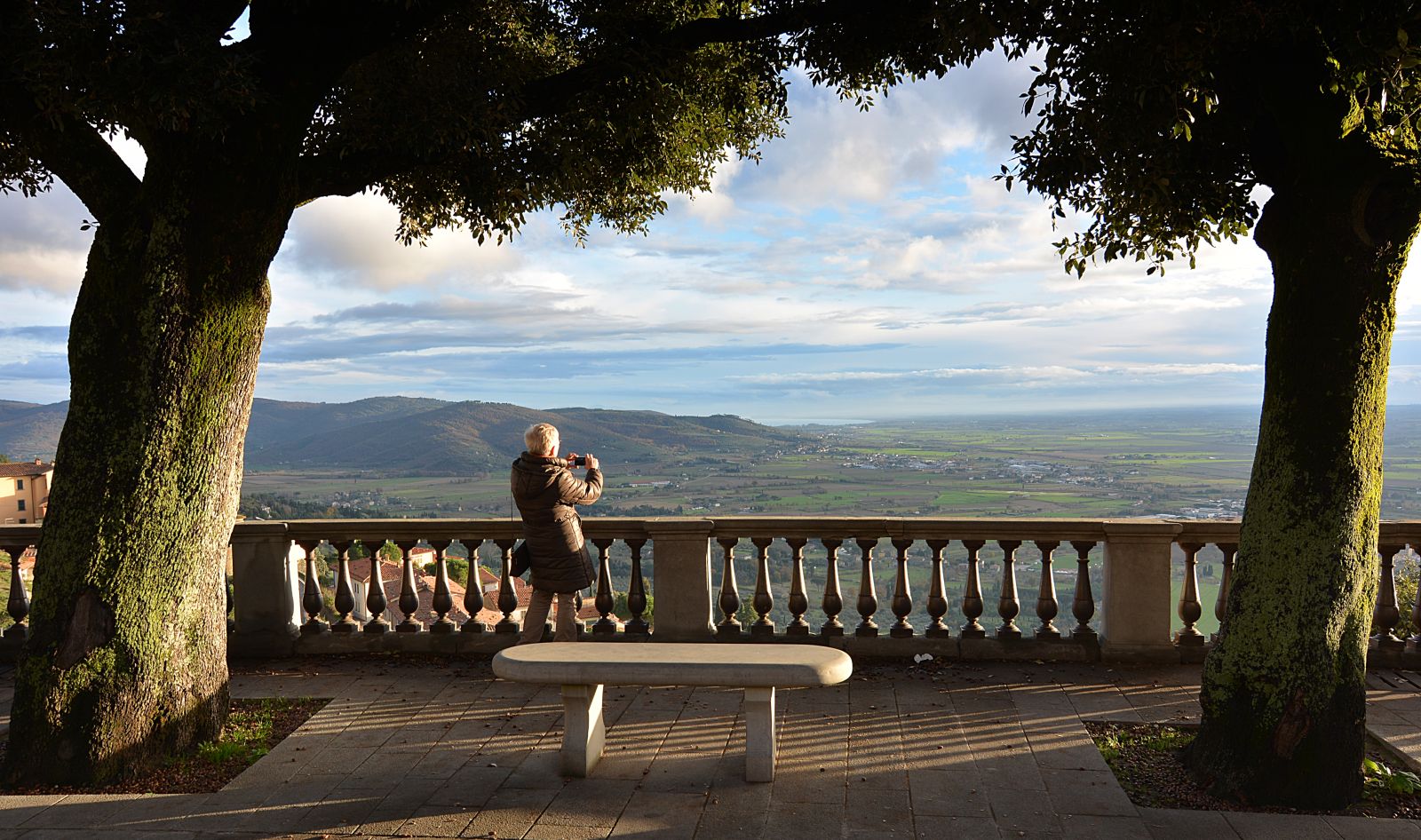 Read the story of Cortona on