The Buggiano area, which was inhabited first by the Liguri tribe, then by the Etruscans and later by the Romans, has always enjoyed great strategic significance thanks to its commanding view of the road that linked Florence with Lucca. The people of Buggiano, good Tuscans that they are, have fought endless battles among themselves as well as with neighbouring towns. In 1315, in the woods of Santa Maria, the Battle of Montecatini pitted the Florentine Guelfs against the Lucchese Ghibellines, led by Uguccione della Foggiola. In 1339, though, Buggiano and indeed the entire Valdinievole fell into Florentine hands.

In modern times the Buggiana area enjoys great importance as an economic centre, with commercial traffic passing through to Livorno whether by road or waterway. The canals round here connect the Fucecchio marshland to the river Arno.

What to see in Buggiano

Besides the elegant medieval town itself, the Buggiano municipality contains a gem in the Villa Bellavista, so called because of the splendid view over Montalbano that its position affords. Otherwise, one should also visit certain churches, especially the Sanctuary of the Santissimo Crocifisso, which presents a façade stippled with the coats of arms of municipalities from across the Valdinievole. The Parish Museum of the Santissimo Crocifisso was inaugurated in the 1970s, and this little collection of sacred art, which lies inside the rectory, contains clerical furnishings and liturgical objects. These include bronze candle-holders, reliquaries and sixteenth-century goblets.

Near the castle of Buggiano, you find the Abbey of Santa Maria, San Michele and San Pietro, which also comprises the church of the Madonna della Salute and San Nicolao.

The abbey and church is home to some precious sculptures from the thirteenth century, including Romanesque capitals and a baptismal font. The latter was made with inlaid marble, which probably came from the ambon and the transenna which separated the monks from the lay people. The abbey also owns a marble lectern.

Buggiano is the ideal starting point from which to explore the whole Valdinievole, as it is located centrally between the main localities of note.

The thermal springs of Montecatini Terme have been sought out for centuries; today they are surrounded by Liberty architecture. It is also worth stopping at Ponte Buggianese, which, along with the municipalities of Altopascio and Fucecchio, offers an alternative route on the Via Francigena. This path is a photographer’s dream, as well as a boon for environmentalists and hikers. In certain periods of the year, you can do about half of the route on the barges that float along the waterways.

Lovers of greenery and walking would do well to visit the nature reserve of the Padule di Fucecchio. Millennia ago, this marshland was covered in seawater, which reached the foot of Montalbano. The Fucecchio marshland is what remains today of this distant geological epoch.

‘The countryside within the walls’ is a biennial event organized by the Buggiano Castello cultural association and by the Buggiano municipality. The town’s inhabitants open the doors of their houses to the numerous visitors who come to the medieval village to admire the orange groves and secret gardens.

The traditional Fiera in Selva (woodland fair) takes place in spring. One of the oldest festivals in the Valdinievole, this is a chance to see and purchase plants, flowers and fruit trees, many of them particular to this area.

The areas restaurants lay on the mainstays of traditional Tuscan cuisine. Antipasti are based around charcuterie and local cheeses; ribollita soup, farinata di cavolo nero and oven-cooked prosciutto all star too.

Tortellona is a dish typical of Buggiano. A long, wavy type of pasta, it is served in a tasty meat sauce which includes liver and chard.

You might also be interested in Discover events, experiences, accommodation and restaurants nearby
Attractions
See allchevron_right
Places of worship Sanctuary of the Santissimo Crocifisso in Buggiano
What to do
Ideas Time-based tours
View allkeyboard_arrow_right
Hunting for hidden corners in Tuscany: the beautiful Buggiano Castello
Villages and castles of Valdinievole
View allkeyboard_arrow_right
From 1 to 3 days The picturesque villages of the Pistoia area 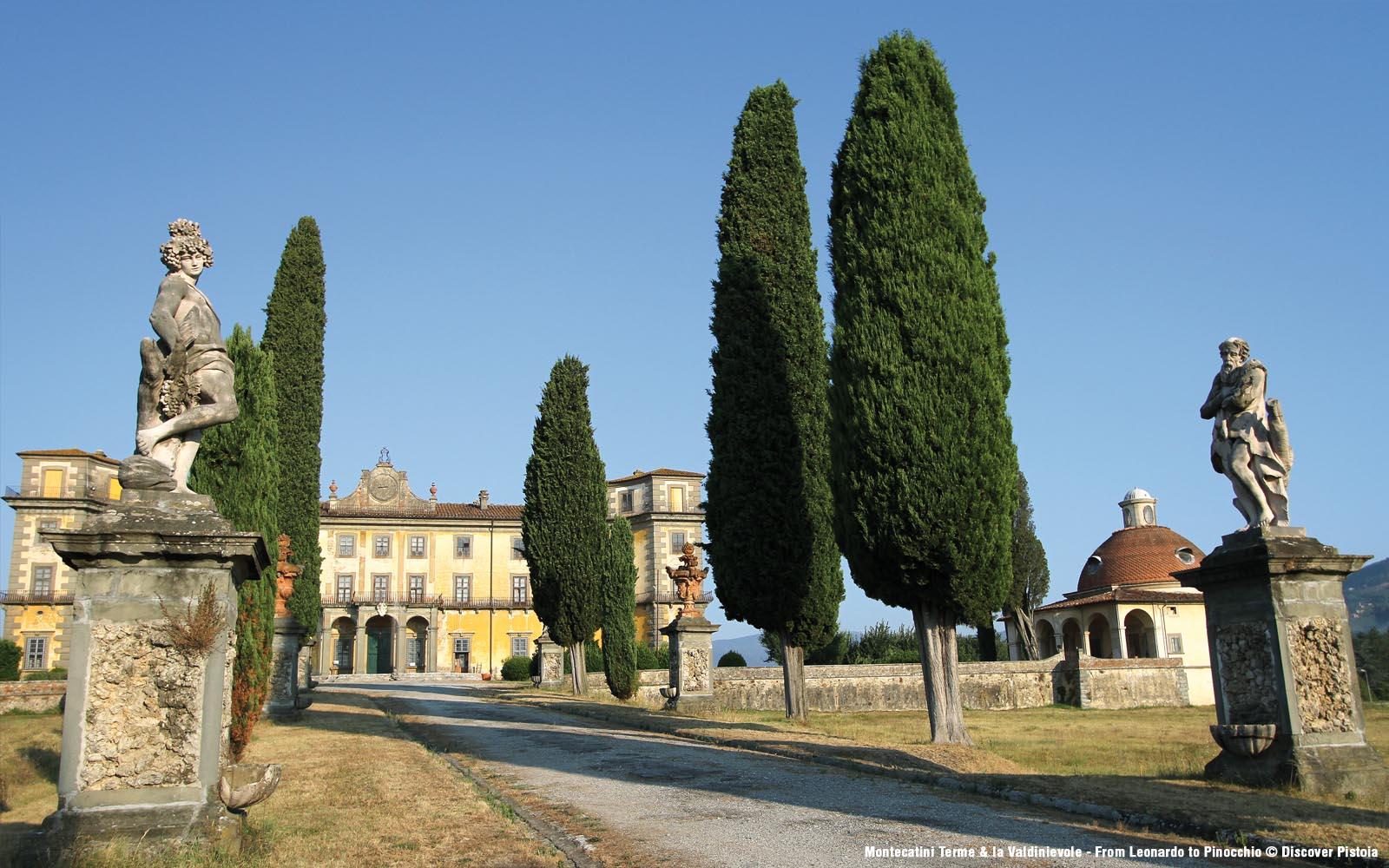 Read the story of Buggiano on